skip to main | skip to sidebar

Pssst: A secret conversation on We Chat

It was a bright sunny day.  I was sitting in the Kanakakunnu Palace grounds in Trivandrum when this whole conversation took place. 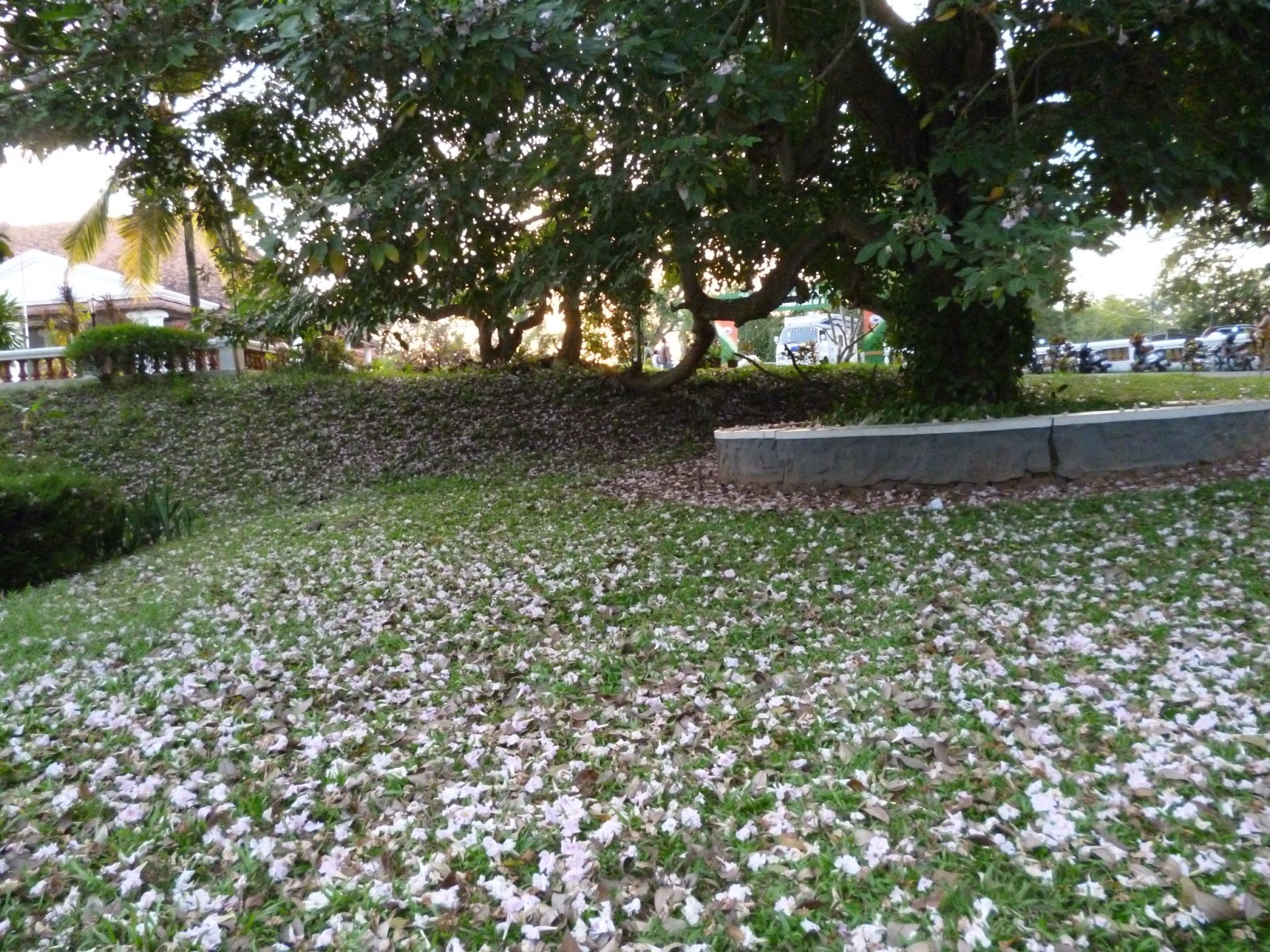 Feeling bored, I was fiddling around with my phone when I thought I would try out this new App called WeChat.  Nobody would have guessed that I was having such an interesting conversation.  There was nothing special about that day.  The sky was blue and the white fluffy clouds with grey painted in here and there slowly drifted by.  The leaves were rustling and there were the usual love birds walking hand in hand or lying down here and there whispering sweet nothings which no one else could hear.  Occasionally they smiled and laughed, happy and care free, not bothered about what was going on in the world.  I sat there alone.
I was at peace enjoying the beauty of nature and the serenity and maybe a bit pensive.  Of late I had begun thinking about the meaning of life.  My life!!    Many times I would awake at night thinking about what I was doing with my life.  Here I was trying to find out what I should do.  That’s when I turned on WeChat and who is there but Jose Silva.  Was this a coincidence?  Jose Silva was the founder of the Silva Method, a mind control technique. He wanted to chat with me.  I’m copy pasting our conversation here.  Make what you will of it:
Jose Silva:  Hi there  !!
Me:  Jose !!  I can’t believe this.
JS: What?
Me:  The fact that u are online right now and want to talk to me.
JS:  Y??
Me:  I was just pondering about life.  And here you are.  Is this a coincidence?
JS:  No.  There are no co incidences in life.  Someone once said that when the student is ready, the master appears.
This was heavy stuff.
Me: Ok.
JS:  So what were you pondering about?
Me: Life in general.  Actually my life.
JS:  Yr life…wat about it?
Me:  I mean the purpose.  Of late I’ve been thinking it’s meaningless.
Js:  Every life has meaning and purpose.  You just got to find out
Me:  But how?
JS:  Ask yr self when you are in the state of Alpha.
Me: Alpha?
JS:  Go to level using the 3- 2-1 method and ask yr self or your councillors.
Me:  The 321 method?  What s that?
JS:  That is the Silva method, which I discovered in the 40’s.  Each human being has immense potential and latent talents which will come out when in a relaxed state of mind.
I was intrigued.
Me:  And…?
JS:  Practice the Silva method and you will know.
I was now wide eyed, curious.  I wanted more. And who were the councillors?  But I didn’t have a chance to ask that coz suddenly Kalpana Saroj joined our group.
KS:  Will it help me in my business?
JS:  Oh yes.  Not only your business but every aspect of your life.
I felt something deep stir within me.  I was touched.  Here was a Mexican- American sharing his wisdom with me or rather us.    I felt like seeing him.    Hearing his voice.
KS:  Jose could you come on video?
After a small pause  an image flickered and I heard ""No problemo"".  It was him.  He had a Mexican drawl.  Suddenly there he was.    Crystal clear.  He looked kind and genial.   There was something paternal about him.  He smiled .  I beamed.  He then said.  You must practice deep relaxation.  And then he went off video.
But now that Kalpana Saroj was here, I had many questions for her too!!  It was a golden opportunity not to be missed.
Me:  Kalpana, how did u do it? It looked like all odds were against you and still u made it!!  Big!!
KS:  I had no options but to go up from where I was.  And each time I achieved something , I discovered a new goal and went after that.   So here I am today.
As I thought about what she said I suddenly had an urge to shake my phone. I held it my hand and shook it vigorously.  And guess what?  Who comes online but the King of Pop himself!!  Michael Jackson.  I had forgotten that when you shake the phone while using WeChat you will get in touch with anyone else who is shaking his/her phone at the moment and MJ just happened to be doing that.  He was dancing and his phone was shaking at the same time.  I have always idolized MJ.  I mean no one can sing and dance like him.  I mean together. At the same time.    He was really innovative and went all out- even to the extent of new looks for new videos which meant doing things to his face as well.  He then came on audio
MJ: Hi
He said in that sweet almost girlish voice of his.
We all said Hi.
Me:  Michael you are soo talented.
JS: Yes you definitely know yr life purpose
Me:  What are you doing nw?
MJ:  Dancing slowly to “”Remember the time when we fell in love…”
Me:   I always wanted to see you dance for a concert.
KS:   Me too
MJ:  I can dance for u now (he said shyly)
Suddenly we saw him.  Yes.  He had his glitter glove, the one studded with diamonds all over, on.  I think he had put his phone a bit away so we could see him.  And then yes!! He did the moon walk.  He slowly glided over the floor.  He seemed to be in a studio or something because there was a spotlight and his socks were sparkling too.  Then he slowly picked the phone and smiled.
I just could not believe my luck.  Here I was in Trivandrum and there he was, wherever he was and I saw him dance in person.  Ya it was almost as good.  I put my phone down and clapped.

We went back to audio.
JS:  Wish I could move like that..
KS:  Me too.  I think it would be a good exercise at the end of a busy day clinching deals!!
MJ: Thank you…Can I invite one of my friends to the chat?
Me: Sure
JS:  No problemo.
In between I noticed my phones battery was showing weak signals.  Aargh!!  Always happens when I’m having an interesting conversation or an important call.
Me:  Guys can you wait a sec?
KS:  Koi baat nahi.
So I quickly moved to the laptop mode of WeChat.  What a relief!!  Thank God it’s so easy and seamless.  It’s kind of embarrassing if you end up taking a long time figuring out stuff in between a chat, is it not?
Anyways this is what followed:
MJ:  This is my friend Liz.
We all said Hi to her.
She then switched on the video and there she was.  Of all people Elizabeth Taylor!!
She smiled.
Me:  Did you really wear a dress made of gold in Cleopatra?
ET:  Oh Yes!! 24 Carat Gold!!I have one of the pictures of that.
She then uploaded this picture!! 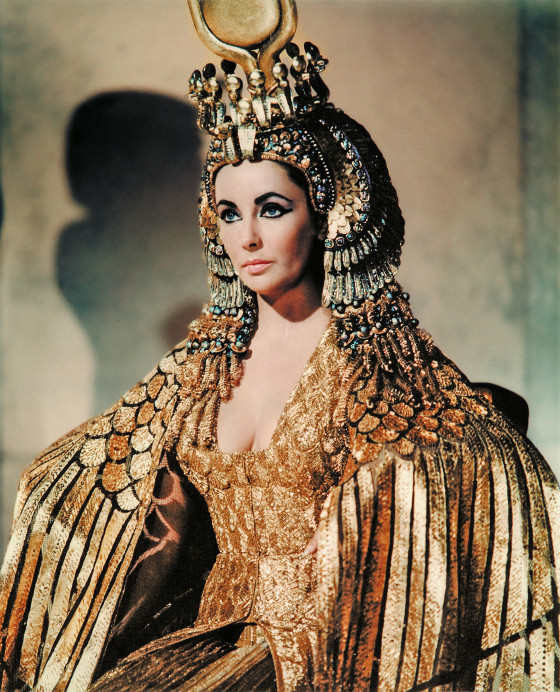 We were awestruck.  There was no denying her screen presence.
KS:  And did they really pay you half a million dollars?
ET:   One million    US dollars.  It was a record at that time.  I was the highest paid actress.
Me:  May I ask you something about your mm marriage?
ET: Go ahead honey!!
Me: Why did you marry Richard Burton twice.
ET:  Beats the hell out of me, but he really made me feel complete. I have a picture of us.  Wait. 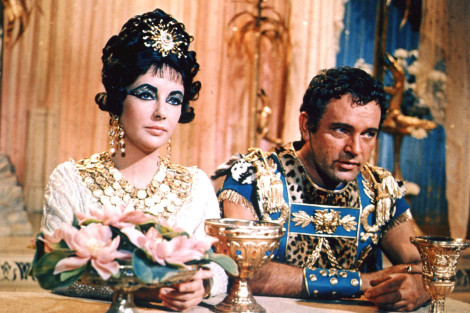 ET: I think we look good here.
I was just admiring the picture and thinking what a great pair they made when we got a ping.
Suddenly someone wanted to join the group.  A familiar voice then said
“” Mein Amitabh Bachchan Bol Raha Hoon “”
This was too much for me.  I was so excited!!  I have always been fascinated by the lives of the stars. I  wanted to know why he did not marry Rekha?  However the question that came out was
Me:  How is little Aaradhya doing?
AB:  The lil darling is fine.
Me:  I loved the songs in Silsila.
There was a pause.  Then:
AB:  Aaah Silsila.
Suddenly my phone rang!!  An all too familiar voice said,”Where are you?  Did you forget we have dinner with Ammamma?”.It was Mummy
Yes. I’d forgotten.  I suddenly realized that it was getting a bit dark.  Most of the  lovers seemed to have left or were in the process of leaving.
I had to suddenly bid adieu.  They were all very sweet.    We promised to meet again on WeChat .  It was so much fun, people from all walks of life sitting in various parts of the world chatting and sharing pictures. I went home feeling lucky and happy.


You never know when your life is going to change, do you?  I did not think that an app called We Chat could bring so much more excitement into my life.  No Sirree!!   But I sure am glad that I got it!!

PS:  This article is a figment of my imagination.  Nothing more and nothing less. The first photo showing the palace grounds is mine.  The rest is courtesy of the net.  This post was written for a contest sponsored by We Chat

and hosted by Indiblogger.